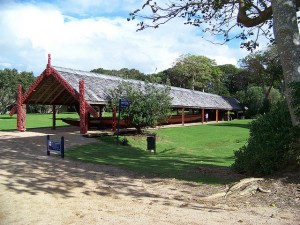 As a travel destination, New Zealand is typically known for the grandeur and unspoiled beauty of its natural landscapes.  Less known are the many sites across New Zealand of deep historical and cultural significance.  Below are listed 10 of these historical sites to keep in mind when planning an itinerary to Auckland.

Waitangi is the site of a traditional Maori meetinghouse where the Treaty of Waitangi was signed between the British Crown and Maori chiefs in 1840.  This most historic of sites is considered the birthplace of the nation of New Zealand.

The oldest standing building in New Zealand is the Kerikeri Stone Store.  Originally built in 1832 as a Wesleyan Mission storehouse, the Stone Store has spent most of its years as a general store.  Today the building is restored to its original state and houses relics and artifacts of New Zealand’s earliest days.

Ruapekapeka is a Maori sacred place and the site of the last battle fought in the Northern War of 1845-46 that broke out over disagreements about the provisions of the Treaty of Waitangi.  The fortress and battlements are well preserved and the battleground has been designated a Historical Icon Site since 2003.

Bream Head has double historic significance, as an archeological site documenting the oldest evidence of Maori settlement dating back over 500 years, and as the location of defensive gun emplacements dating to the early days of the Second World War when the threat of Japanese invasion was very real.

Located on the shores of beautiful Waitemata Harbour, The Royal New Zealand Navy Museum site was once an integral part of Auckland’s early defense system and remains a largely intact example of early 19th century New Zealand.  The museum is dedicated to showcasing the Royal Navy’s contributions to the New Zealand identity.

A unique museum devoted to the famous 1863 Battle of Rangiriri between British forces and the King Movement Maori.  Nearby is the well-preserved Rangiriri Pa Redoubt, one of dozens of fortresses built by the Maori across the central North Island.

Old Saint Paul’s Cathedral in Wellington was built in 1866 and is one of the world’s finest examples of timber-constructed Gothic Revival architecture.  Displays and exhibits tell the story of Wellington’s early history.

Located in Nelson, Founders Heritage Park is a replica village and museumscape that captures the look and feel of life in New Zealand during the colonial days of the 19th century.

Located south of Christchurch near Timaru on the east coast, the Centre is New Zealand’s most significant collection of ancient Maori rock art and is dedicated to preserving the cultural heritage of the Maori people.