New Zealand’s North Island may have more people, but the South Island packs more punch when it comes to stunning scenery and adventure sports. Here are three different weeklong South Island itineraries to chose from, depending on what your interests are. 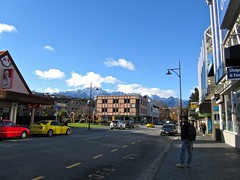 The South Island doesn’t have as many large cities as the North, but if you want to focus on the cities, Nelson, Christchurch, Dunedin, Invercargill, and Queenstown are some of the best. This itinerary can be done by bus, but, as with most travel in New Zealand, it’s ideal to rent a car and drive yourself. Most of the drives between cities will take 5-6 hours, with the exception of the drive from Invercargill to Queenstown, which will only take about 3 hours.

This coastal city in Tasman Bay is a great starting point for a South Island adventure. Nelson is small by most standards, but is known for its arts and crafts scene and associated artistic vibe. Spend your day checking out the local galleries and waterfront cafes, perhaps cruising in the harbor, or relaxing in some of Nelson’s pretty parks.

Christchurch is the largest city on the South Island, and is known as being one of New Zealand’s most beautiful, despite being rocked by a series of strong earthquakes since 2010. There’s still plenty to do in the “Garden City,” even after the quakes. Use your day to stroll around the “new” downtown area, go punting on the Avon River, or play with some penguins at the Antarctic Centre.

For your first afternoon/evening in Dunedin, head downtown to the Octagon (like a city square, but with 8 sides!) to get a feel for this Scottish-inspired city. Take a walk and admire some of Dunedin’s famous architecture, and grab a meal at one of the many nearby cafes. If you have time, take a tour of the Cadbury World chocolate factory – complete with a chocolate waterfall! On Day 2, be sure to check out Baldwin Street, which is officially the steepest street in the world. Then head out to St. Clair Beach to stroll along the Esplanade, or even take a surfing lesson. Round out the day with a drive around the Otago Peninsula, where you can spot albatross and perhaps even penguins.

From Dunedin, hit the Southern Scenic Route to the wind-swept town of Invercargill. Located in the heart of New Zealand farm country, Invergargill is the perfect place to do a farm stay. But before you settle in for the evening, drive half an hour south to Bluff, which is the southern-most town in New Zealand (not counting the settlement on Stewart Island). Here, head to the lookout on Bluff Hill, and stop at the signpost at Stirling Point for a good photo-op. 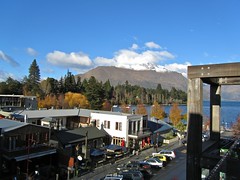 No tour of the South Island’s cities would be complete without a visit to the resort town of Queenstown. This town in the shadow of The Remarkables mountains on the shore of Lake Wakatipu is easily one of New Zealand’s most popular destinations.

There’s plenty to do in Queenstown year-round, including skiing/snowboarding in the winter and plenty of outdoor adventure sports in the warmer months. On Day 1, tackle some of those famous adventure sports – offerings include everything from bungy jumping to skydiving to rafting to jetboating to ziplining and more. On Day 2, check out the views over Queenstown from the Skyline Gondola, perhaps splurge on a helicopter tour into the nearby mountains, and then round out the day and your adventure with a dinner cruise on Lake Wakatipu. 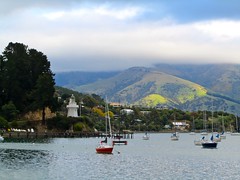 If it’s scenery and postcard-perfect landscapes you’re after, your itinerary need not include so many cities. Instead, consider some of the smaller towns and areas of the South Island that will keep your camera busy. This itinerary includes Kaikoura and Akaroa on the east coast, 2 days on the wild West Coast, a couple of days in/around beautiful Queenstown, and a drive up the center of the island to Mt. Cook. Again, this itinerary is best done by renting a car and driving yourself, though it will require two separate rentals – one on each coast.

Start your adventure in this tiny coastal town halfway between Picton and Christchurch. Kaikoura is made up of basically only one street, but its location between the sea and the mountains makes it an extremely pretty destination. Here, book yourself on one of the whale-watching tours Kaikoura is known for, or hike out to the tip of the Kaikoura Peninsula, where you may spy some lazy New Zealand fur seals during the cooler months.

This little French-infused town located on the Banks Peninsula an hour outside of Christchurch is a beautiful place to visit anytime of year. Stroll the colorful streets, pop into a café for fish and chips, and take a wildlife cruise out in Akaroa Harbor, where you can spot New Zealand fur seals, Little Blue Penguins, and the very rare (yet extremely cute) Hector’s Dolphins. 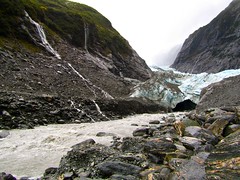 The next morning, head into Christchurch early so you can catch the TranzAlpine train that travels daily from Christchurch to Greymouth on the West Coast. This 4-hour-long train ride traverses the Canterbury Plains and cuts through the Southern Alps via Arthur’s Pass, and is often called one of the best scenic train journeys in the world.

From Greymouth, drive down the West Coast into Westland National Park, where two of New Zealand’s most famous glaciers can be found. Plan to arrive in either Franz Josef or Fox in the late morning/early afternoon, so you can enjoy a half-day glacier hike on either the Franz Josef Glacier or Fox Glacier.

From the West Coast, drive south through Mount Aspiring National Park toward the southern resort town of Queenstown. Located on the shore of Lake Wakatipu in the shadow of the appropriately-named Remarkables mountain range, Queenstown is one of New Zealand’s most popular destinations – and for good reason. Not only is Queenstown the “Adventure Capital of New Zealand,” but it’s also a stunningly pretty town. Head up the Skyline Gondola to really appreciate the views, or head out onto Lake Wakatipu for a dinner cruise. 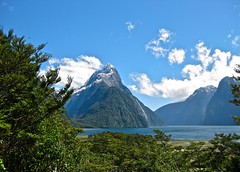 On Day 2, consider a guided day-tour to Milford Sound from Queenstown. This impressive fjord in Fiordland National Park is by far New Zealand’s top tourist attraction, and is a must for anyone interested in the country’s famous scenery. Even on rainy days Milford is beautiful, with thousands of waterfalls cascading down mountainsides into the sea.

Chances are you’ll be leaving New Zealand from Christchurch on this trip (or Auckland via Christchurch), so a drive from Queenstown to Christchurch via Mount Cook (New Zealand’s highest mountain) would be a great way to round out your week. Be sure to stop at Lake Pukaki before taking a break at the Mount Cook visitor’s center in Aoraki/Mount Cook National Park. From there, head north to Lake Tekapo, where another stop at the Church of the Good Shepherd is warranted. 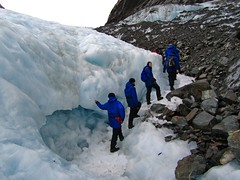 For the adventurous spirit, there is no better place to go than the South Island. Here’s a 7-day itinerary for those who love to get the adrenaline flowing through their veins. Unlike the previous two itineraries, this one could easily be done by bus instead of a rental car, however getting to Franz Josef from Christchurch (where you’d likely fly into) can be tricky.

Begin your active adventure at the Franz Josef Glacier, where you can book a half- or full-day glacier hike on this ancient (and huge) slab of ice. Glacier trekking in New Zealand is especially unique because the glaciers here extend down from the mountains through temperate rainforest. If you feel like splurging, opt for the heli-hike option, where a helicopter will drop you off atop the glacier.

The next day, head south through Mount Aspiring National Park, stopping for the day in Wanaka. Here, enjoy all sorts of water sports on Lake Wanaka, or hit the skies and jump out of a plane. Skydiving is popular all over New Zealand, but if you want the best views for the lowest price, Wanaka is the place to do it. 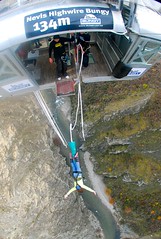 Yes, Queenstown has shown up in all three of these itineraries, but that’s just because it has a little bit of everything and shouldn’t be missed!

On Day 1, get yourself acquainted with Queenstown by booking some introductory adventure sports. Go parasailing over Lake Wakatipu, luge down the Skyline Gondola hill, or go ziplining up in the forests above the city. On Day 2, tackle any fears of heights you might have by going bungy jumping. Queenstown has 3 different bungy jumps, including the Kawarau Bridge (the original bungy site), the Ledge Bungy (near the Gondola, overlooking the city), and the Nevis Highwire (the tallest jump in the country, at 134 meters). On Day 3, take it a bit easier with jetboating through narrow canyons in the morning, and perhaps a 4-wheel-drive adventure into the nearby countryside in the afternoon. On Day 4, tackle some water sports, which could include whitewater rafting, river boarding (boogie-boarding through river rapids), or even canyoneering. By Day 5, you might be all adventured-out. But, if not, consider mountain biking or attempting to summit one of Queenstown’s peaks. Even after 5 days in Queenstown, there’s bound to be more that you’ll want to do.