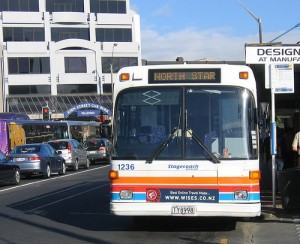 Statistically, overseas visitors would rather use the domestic air services to travel within New Zealand, rather than traveling by bus or train. Actually, car rental , private cars and ferries are the top three methods of transport used by visitors from Britain and Canada, while the scheduled bus and train services are pretty much ignored.

However, if you are on a low budget, using a bus to travel within a region or from one city to another is a good option. The roads are in very good shape, thanks to the many investments done in the infrastructure. Generally speaking, traveling by bus in New Zealand is cheap, fast and efficient.

Getting to/from New Zealand by Bus – From Another Country

New Zealand is an island so it’s impossible to get here by bus from another country.

Getting around New Zealand by Bus – From One Island to Another

If you need to cross between the North and the South Island, the cheapest way to go is by plane. Also, there are ferries linking the islands. It’s virtually impossible to get between the two islands by bus.

Getting around New Zealand by Bus – Within the Same Island

Buses are a cheap way to get from one city to another on the same island. If you book online, you might even get some bargains.

The companies offering coach services in New Zealand are:

Getting around New Zealand by Bus – Within a City

Bus travel is very popular in Auckland . If you don’t mind to walk to the bus station, you can easily do without a car in this city. However, at peak hours the buses aren’t that reliable and delays of up to 15 minutes are common on all routes. The bus system in the city is not integrated, so there are different bus companies serving different parts of the city. The largest operator is Stagecoach.

In Hamilton, the bus service is also a good option to get around the city. The operator is Environment Waikato and covers the entire city. One way tickets are good for 2 hours (and cost $2.60NZ).

Wellington also has an extensive network of buses, including a number of routes served by electric trolleybuses. Free maps are available in locations around the town. For the travelers, the best option is to get an all-day central bus pass.

Rotorua, on the other hand, has a bus service for is limited. Although Christchurch’s bus system has been improved over the last years, it’s still a good idea to plan to use a rental bike while you are here. And in Queenstown the bus service is also limited, with only three routes available.