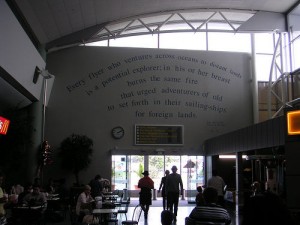 The airport has separate domestic and international terminals. A bus runs between the terminals every 20 minutes. If you prefer to walk, it should take about 10 minutes to handle the 800 meters between the two terminals.

The international terminal has ATMs on both sides of security. Coffee shops and a food court are found in the departure area before security.

About 30 airlines serve Auckland International Airport, offering direct connections to domestic destinations, as well as international ones. Here is a list of some of the important airlines:

When looking for cheap air tickets or cheap international airfare it is always a good idea to check various booking systems. Also, make sure to book your ticket ahead of time. If you prefer a certain airline, make use of their frequent flyer program and make sure to sign up for deals at several airlines.