Getting from Auckland to Wellington (and return) 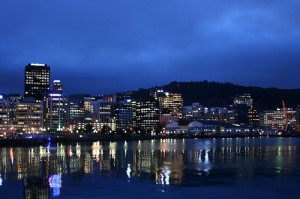 Wellington is the capital of New Zealand and the country’s third largest city. It is tucked between the harbor and mountains, offering a superb landscape locals and travelers love. The city offers a blend of culture, history, foods and entertainment.

Traveling to Wellington from any other part of New Zealand is not a challenge. But you have to choose which means of transport to use, depending, of course, on your time and budget.

If you don’t have much time on your hands, then you should consider flying. In little over an hour you’ll get from Auckland to Wellington. And the fares aren’t very high either. However, if you are on a low budget and don’t mind spending 11 hours on a bus, then that’s the way to go. Or you can choose to drive between the two cities in about 8 hours.

Wellington International Airport is locate 5 km from the city center and is a major transit airport for domestic travelers. Flights from Auckland are operated by Jetstar, Qantas Airways and Air New Zealand. The flight time between the two cities is 1h 5 min.

The cheapest flights are operated by the low cost carrier Jetstar. You can book a one way flight for US$73 per person , while return flights start at US$146 per person.

Trains from Auckland to Wellington

The Overlander connects Auckland to Wellington , offering superb views along the way: the Central North Island ski towns of National Park and Ohakune, the farmland, rivers, a volcanic plateau and many more.

The flexi fare is $131 NZD for an adult regardless of when you plan to travel. The travel time is 12 hours.

Buses from Auckland to Wellington

The national carrier InterCity Coachlines operates bus services between Auckland and Wellington. There are three departures each day. The travel time is 11 hours. Fares start at $35 NZD (non refundable) for an adult, one way. The student ticket costs $56 NZD, one way.

Driving from Auckland to Wellington

New Zealand is a superb country and it’s a shame not to explore it on your own pace. Rent a car and drive from Auckland to Wellington. The shortest route is 636 km and the total drive time is about 8 hours. Do plan some stops along the way or switch drivers.