Getting from Auckland to Dunedin (and return) 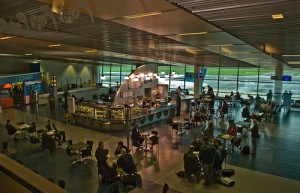 Dunedin (old Gaelic for Edinburgh) is the second largest city on the South Island of New Zealand. Known as the Edinburgh of the South , the city is very proud of its Scots heritage. It is built on a relatively small area surrounded by hills and is home to the steepest street in the world (Baldwin Street).

Regardless of why you need to travel from Auckland to Dunedin, it’s important to know which means of transport are available and how much the journey would cost.

The fastest and cheapest way to get from Auckland to Dunedin is by plane. It takes about 2 h and the single ticket starts at NZ$113*. Should you want to see the scenic sights along the way, then for about NZ$205 and 27 hours of traveling, you can travel between Auckland and Dunedin by bus, ferry, train and bus.

Auckland Airport (AKL) is the largest and busiest airport in New Zealand , located about 21 km from the city center. It is hub for both Air New Zealand and Pacific Blue.

Dunedin International Airport (DUD) serves Dunedin , Otago and Southland regions. It is located about 22 km from Dunedin and is not hub for any airline.

Direct flights to Dunedin are run by Air New Zealand and JetStar Airways. The flight time is almost 2 h. In late December 2011, flights start at NZ$113 per person, one way on JetStar , while a round trip flight starts at NZ$231 on the same airline.
In early March 2012, single fares start at NZ$103.

Overland from Auckland to Dunedin

Although the two cities are located far apart and on different islands, it is possible to travel overland from Auckland to Dunedin. But you need to break the journey into three chunks:

Step 1: Auckland to Wellington by Overlaner Train or bus

There are two choices to travel overland between Auckland and Wellington: the Overland and the bus.
The train operates daily during the peak season and three times a week during the off-peak season. The travel time is 12 h and the flexi ticket is NZ$131 regardless of when you plan to travel.
InterCity Coachlines operates bus services between Auckland and Wellington and there are several departures a day. The travel time is 11h and the fares start at NZ$35 per person, one way.

Step 2: Wellington to Christchurch by ferry and Coastal Pacific Train or bus

A scenic and easy way to get from Wellington and Christchurch is by Interislander ferry and the connecting Coastal Pacific. There are daily departures at 8:25 a.m. from the ferry terminal in Wellington. The travel time is 10 hours.
When traveling from Christchurch to Wellington, the trains departs Christchurch daily at 7 a.m and arrives in Wellington at 4:25 p.m. the same day.
The combined one way ticket costs NZ$130 per person. Tickets can be bought from here.

Another option is to take the ferry from Wellington to Picton. There are five sailings per day and the crossing time is 3 hours. Single tickets start at NZ$65 (adult).

Then take the bus from Picton to Christchurch. Buses are run by InterCity Coachlines and Newmans Coach Lines . There are two departures (from each company) a day and the bus ride takes about 5 ½ h. Single fare starts at NZ$31.

Step 3: Christchurch to Dunedin by bus

InterCity Coachlines and Newmans Coach Lines operate buses from Christchurch to Dunedin.
Both companies offer 2 departures per day and the travel time is about 6 hours. Single fare starts at NZ$40.

Driving from Auckland to Dunedin

You can rent a car and plan to drive between Auckland and Dunedin. You’ll be driving on State Highway and also use the ferry to get between the two islands. The total travel time is about 21 h 40 min so you should definitely plan this as a several days road trip.
The ferry route is run by Interislander.

Note:* prices valid at the time the article was written