Getting from Dunedin to Queenstown (and return) 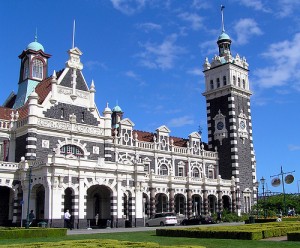 Dunedin (old Gaelic for Edinburgh) is the second largest city on the South Island of New Zealand. It is a town proud of its Scots heritage and where you can walk on the steepest street in the world – Baldwin Street.

Queenstown , also located on the South Island, offers year round attractions for travelers, as well as super panoramic views. Lake Wakatipu and the Remarkables are the best known places to visit outside of the town.

If you plan to travel between Dunedin and Queenstown (and the other way around), it’s a good idea to know which means of transportation are available and how much the journey would cost.

Dunedin International Airport (DUD) serves both domestic and international flights and is located about 22 km from the city. It is the largest airport on the South Island.

Queenstown Airport (ZQN) serves mostly domestic flights during the non peak season, while during the ski season it gets quite a lot of international flights.

There aren’t any direct flights from Dunedin to Queenstown. New Zealand offers a connecting flight through Christchurch and the single fares start at NZ$375, regardless of when you plan to fly.

Buses from Dunedin to Queenstown

The following companies run direct services between Dunedin and Queenstown:

Trains and buses from Dunedin to Queenstown

The most scenic way to travel from Dunedin to Queenstown is by the Taieri Gorge Railway ‘Track & Trail’ , followed by a minibus connection. The Taieri is a preserved railway which runs daily year-round tourist trains through spectacular scenery, on part of the former Dunedin-Cromwell branch railway. The train terminates at Pukerangi (58km from Dunedin) and from there you take the minibus to Queenstown.

Driving from Dunedin to Queenstown

You can rent a car and drive the 282 km between Dunedin and Queenstown in about 3h 40 min. You have the freedom to travel at your own pace, stopping wherever you want and don’t need to relay on the bus schedule either.