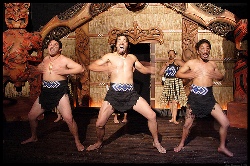 All Blacks (the New Zealand National Rugby team) perform haka before each game and we all have seen haka on TV. Let’s take a look at this traditional Maori dance and find out where you can experience haka in New Zealand.

Haka is a traditional Maori dance from New Zealand. Haka are not just war dances. They are performed for amusement, to welcome guests or to acknowledge great occasions. Today, haka is part of the official welcome ceremonies for distinguished guests. It’s also performed by the All Black before each game.

Ka Mate is the most well known type of haka and is a ceremonial dance. This is the haka performed by the All Blacks.

In older times, peruperu – characterized by leaps during which the legs are pressed under the body – was performed before the battle, to invoke the god of war and to scare the enemy. Ngeri is performed without weapons and its purpose was to motivate the worries psychologically.

Manawa wera was generally associated with funerals and death, no weapons were involved and the movements had little choreography.

Where to see Maori haka performed

Located in Rotorua, Te Puia is a Maori arts and culture performance hall. Each day at 12:15 PM haka is performed. Other traditional dances are also performed during the day or evening. Tickets cost NZ$25 for an adult and NZ$11 for a child.