Itinerary for 10 Days in New Zealand

New Zealand may be a small country – but don’t be fooled by its size. What New Zealand lacks in land area it makes up for in stunning scenery, friendly locals, and a wealth of things to see and do. Ideally, you would have weeks and weeks to spend exploring New Zealand, from its rolling plains to its snow-capped mountains. But, if you find yourself with only 10 days to spare, here’s what you don’t want to miss out on. 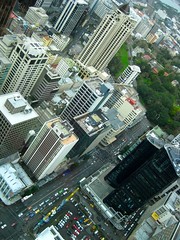 Most New Zealand itineraries will start in Auckland, the country’s largest city, since the majority of international flights arrive here. Staying downtown (around Queen Street is ideal) will allow you access to all the best things Auckland has to offer, including museums, restaurants, nightlife, and more.

Begin your day with a stroll down to Waitemata/Viaduct Harbour, where you’ll be able to get a sense of why Auckland is nicknamed the City of Sails. Also nearby will be the Sky Tower – the tallest free-standing structure in the Southern Hemisphere at 328 meters (1,076 feet). Here you can visit the observation deck, gamble in the SkyCity casino, or enjoy a fancy meal in a revolving restaurant high above the city. If you’re traveling during rugby season, check to see if there will be any evening matches going on at Eden Park while you’re in town – in New Zealand, the sport of rugby is deeply ingrained into kiwi culture.
The next morning, hop a bus or pick up a rental car and head south to Rotorua. 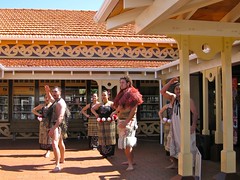 It will take you around 3 hours or so to get from Auckland to Rotorua, allowing you plenty of time to explore New Zealand’s top geothermal destination. Rotorua has been hosting tourists for more than a century, with its main attractions being its geysers, thermal pools, and other geological oddities.
Head out to one of the thermal parks in the morning/afternoon to see some boiling mud and brightly-colored mineral pools for yourself, and then plan on learning a bit about New Zealand’s native Maori culture in the evening. Attend a Maori hangi dinner/concert, where you’ll get a glimpse into ancient Maori village life, taste a meal cooked in earthen ovens, and enjoy traditional Maori song and dance. If you have time in between, consider going zorbing – a unique sport which involves you inside a giant plastic ball, rolling down a hill.
Get a good night’s sleep, and then move on to Wellington, New Zealand’s capital. 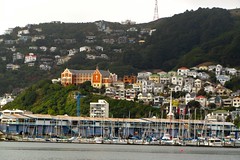 Driving or taking a bus/train from Rotorua to Wellington will take at least half a day, but Wellington should definitely make it onto your New Zealand itinerary regardless. Unlike many world capitals that exist strictly for governmental purposes, Wellington actually serves as New Zealand’s cultural capital, as well as its political one. The city is overflowing with cafes, international restaurants, sculptures and artwork, and an overall good vibe.
When you arrive, you might want to grab dinner on the eclectic Cuba Street, and follow it up with drinks at one of the many bars along Courtenay Place. There are plenty of hotels and hostels downtown, and Wellington is an extremely compact and walkable city, so you should have no problem finding a place to stay in the thick of things. On Day 2, take a stroll along the Wellington Waterfront to Oriental Bay, catch a bus up to the lookout atop Mount Victoria, and perhaps ride the historic Cable Car from Lambton Quay up to the Botanic Gardens. If the weather doesn’t cooperate (which it often doesn’t in “Windy Welly”), spend the afternoon getting lost in Te Papa, New Zealand’s fantastic (and free!) national museum, and take a free hour-long tour of New Zealand Parliament.

Then, bid the North Island farewell and hop a quick 45-minute flight to Christchurch.

Christchurch, the largest city on New Zealand’s South Island, is known as being one of New Zealand’s most beautiful. And, even though the “Garden City” has been plagued by earthquakes since September 2010, don’t let that stop you from visiting for a day. Stroll around downtown Christchurch (which is coming back to life despite the quake damage), perhaps go punting on the Avon River, or go play with some penguins at the Antarctic Centre. 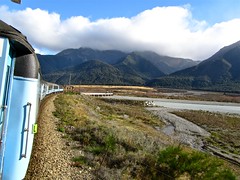 The next morning, catch the TranzAlpine train that travels daily from Christchurch to Greymouth on the West Coast. This 4-hour-long train ride traverses the Canterbury Plains, and then cuts through the Southern Alps via Arthur’s Pass. The changing scenery of this rail trip has earned it the accolade of being called one of the best scenic train journeys in the world, and is definitely something not to be missed. Once you arrive in the small town of Greymouth, either spend the rest of the day relaxing, or rent a car and drive half an hour north to the Punakaiki Pancake Rocks.

The next morning, drive or take a bus down the West Coast into Westland National Park, where two of New Zealand’s most famous glaciers are located. Plan to arrive in either Franz Josef or Fox in the afternoon so you can then partake in a half-day glacier hike on either the Franz Josef Glacier or Fox Glacier. If you’re staying in Franz Josef, many glacier treks come with discounts on soaking in glacial hot pools afterwards.

The next day, make your way through the Southern Lakes District to Queenstown. 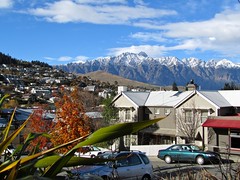 No trip to New Zealand would be complete without a visit to the resort town of Queenstown. During the winter, Queenstown is full of skiiers and snowboarders who take advantage of the powder that coats the various mountain ranges in this part of the country. In the warmer months, Queenstown plays host to different sorts of adrenaline junkies – it doesn’t call itself “New Zealand’s Adventure Capital” for nothing! But don’t think you can only enjoy Queenstown if you want to jump off bridges or out of planes. There’s plenty to do here for everyone.
The drive from the glaciers to Queenstown will take roughly 6 hours – more if you add a stop in the charming lakeside town of Wanaka. Therefore, you probably won’t be arriving in Queenstown until the late afternoon. To get yourself acquainted with this small town on the shores of Lake Wakatipu, head up the Skyline Gondola for some fantastic views, and then consider grabbing dinner at Fergburger, Queenstown’s most famous eatery.

On Day 2, consider a guided day-tour to Milford Sound. This impressive fjord in Fiordland National Park is by far New Zealand’s top tourist attraction. Even on rainy days Milford is beautiful, with thousands of waterfalls cascading down mountainsides into the sea. If a full-day tour doesn’t sound appealing, however, consider renting a car and driving to the nearby former mining town of Arrowtown, or to the lakeside town of Glenorchy.
On Day 3, give in to your daredevil tendencies. Queenstown has more activities to offer than you can imagine, from bungy jumping (it was invented here) to jetboating (also invented here) to skydiving to parasailing to whitewater rafting. If you want something more family-friendly, there’s also luging down the gondola hill, ziplining, and helicopter rides into the nearby mountains. Round out the day and your New Zealand adventure with a dinner cruise on Lake Wakatipu.