Itinerary for 7 Days on the North Island

Despite New Zealand’s small size (it’s roughly the same area as the U.S. state of Colorado), its two islands manage to differ drastically in both scenery and things to do. If you only have a week to spend in this South Pacific country, it might be wise to focus on just one island. If the rolling, green North Island is your pick, here’s a suggested weeklong itinerary. 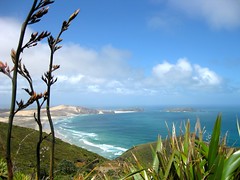 Located at the very northern tip of New Zealand, the Northland region is known for its white sand beaches, rugged bush, and tiny towns. It’s possible to reach this region via bus from Auckland and to explore the region via bus tours from Paihia, but renting a car would be an even better idea so you have more freedom. Basing yourself in the town of Paihia in the Bay of Islands will give you a great jumping-off point, regardless of the mode of transport you choose to use, and will also give you a host of great B&Bs to choose from.

On Day 1 in Northland, head even further north than Paihia up to 90 Mile Beach and Cape Reinga. Cape Reinga’s lighthouse is located at one of the northernmost points in New Zealand, and makes for some great photos. If you look closely out at the nearby water here, you can see where the light-blue Tasman Sea merges with the dark-blue Pacific Ocean. You’ll also want to be sure to drive down 90 Mile Beach, which is a stretch of sand that is officially part of State Highway 1. Those with an adventurous spirit can also go sand boarding in the nearby Te Paki Sand Dunes.

Upon your return to Paihia, hop on The Rock overnight Bay of Islands cruise at 5 p.m., and enjoy an evening full of sailing, fishing, swimming, and even night kayaking. The next morning, you’ll enjoy snorkeling, beach walks, and more before returning to Paihia at 3 p.m. Spend the rest of the afternoon strolling the streets of Paihia, a small coastal town full of fish and chips shops and beautiful views. If an overnight cruise isn’t your thing, take an afternoon one out in the bay instead to check out Hole in the Rock and to perhaps spot some dolphins! 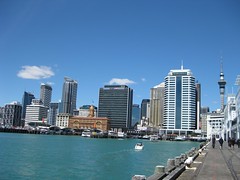 No North Island itinerary would be complete without a stop in Auckland, New Zealand’s largest city. It will take 3-4 hours to reach Auckland from Paihia depending on the mode of transport you choose, but you should still have enough time to explore this city of 1.4 million. Staying downtown (around Queen Street is ideal) will allow you access to all the best things Auckland has to offer, including museums, restaurants, nightlife, and more.

Be sure to stroll down to Waitemata/Viaduct Harbour, where you’ll be able to understand why Auckland is nicknamed the City of Sails. Also near the harbor is the Sky Tower – the tallest free-standing structure in the Southern Hemisphere at 328 meters (1,076 feet). Here you can see Auckland from the observation deck, or enjoy a fancy meal in a revolving restaurant high above the city. If you’re traveling during rugby season, check to see if there will be any evening matches going on at Eden Park while you’re in town – in New Zealand, watching rugby is almost akin to a national religion. 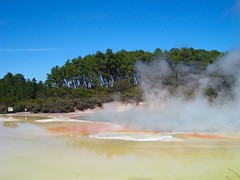 It will take you around 3-4 hours to get from Auckland to the small city of Rotorua via bus or car, allowing you plenty of time to explore New Zealand’s top geothermal destination as long as you get an early start.

Head out to one of the big thermal parks in the morning/afternoon to see some boiling mud, geysers, and brightly-colored mineral pools. In the evening, educate yourself on New Zealand’s native Maori culture by attending a Maori hangi dinner/concert, where you’ll get a glimpse into ancient Maori village life, taste a meal cooked in earthen ovens, and enjoy traditional Maori song and dance. If you have time in between, consider catching a shuttle from the Rotorua iSite out into the countryside to try out zorbing – a unique and wacky sport that involves you diving into a giant plastic ball and rolling down a hill. 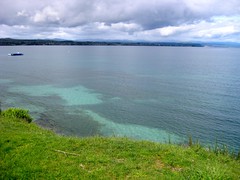 Sleep in a bit the next morning, because your next destination, Taupo, is only a little over an hour from Rotorua by bus or car. This small, quiet town is located on the shore of Lake Taupo, New Zealand’s largest lake. On a clear day, you can see the snow-capped volcanoes of Tongariro National Park looming across the calm water.

Popular things to see in Taupo include the colorful Huka Falls which roar down a section of the Waikato River, and Craters of the Moon geothermal park, where you can take a short walk through an otherworldly volcanic landscape. If you want a bit more excitement in your afternoon, consider bungy jumping over the Waikato River, skydiving over Lake Taupo, or perhaps taking a helicopter ride over Tongariro National Park.

Driving or taking a bus/train from Taupo to Wellington will take at least 6 hours, so allowing 2 days in New Zealand’s quirky capital would be an ideal way to round out your North Island adventure. Even though many visitors to New Zealand assume that Wellington is simply the country’s political capital, the city actually is much more. Wellington is overflowing with cafes, international restaurants, sculptures and artwork, and an overall good vibe. 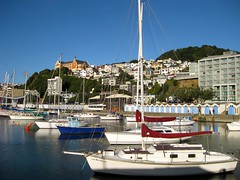 When you arrive, you might want to grab dinner on eclectic Cuba Street, where you can find just about any kind of food you can dream of as well as some of Wellington’s best street performers. Follow dinner up with a drink at one of the many bars along nearby Courtenay Place. Thanks to Wellington being an extremely compact and walkable city (and having a good bus system), there are plenty of downtown hotels and hostels to choose from that will serve as a good base for your time in the city.

On Day 2 in Wellington, take a stroll along the hip Wellington Waterfront to Oriental Bay, catch a bus up to the lookout atop Mount Victoria for some great birds-eye views, and perhaps ride the historic Cable Car from Lambton Quay up to the Botanic Gardens. If the “Windy Welly” weather doesn’t allow for much time outdoors, don’t worry. You can spend the afternoon getting lost in Te Papa, New Zealand’s fantastic (and free!) national museum, and café-hopping on Cuba Street. You could even consider taking a free hour-long tour of New Zealand Parliament, where you can not only find out more about the country’s government, but also learn about the steps Wellington has taken to earthquake-proof its historic buildings.

Round out your night and your North Island trip with a splurge – head to The Matterhorn on Cuba Street, which is consistently named one of the best restaurants in all of New Zealand.