Unlike many other countries around the world, New Zealand does not have any laws directly forbidding public nudity. This, combined with a distinct European influence and the country’s laid-back attitude, means that nude beaches and beaches where nudity is welcomed can be found all over New Zealand. 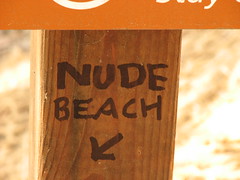 There are several established and well-known nude beaches in New Zealand – particularly up north, where the weather is generally warmer – as well as many beaches where clothing is optional. Even many of the country’s popular public beaches have set-aside sections where nudists/naturists typically gather.

On these beaches, nude sunbathing, skinny dipping, and walking are perfectly fine, but it should be noted that many of these beaches welcome families – so keep that in mind, and be respectful. Those wishing to be nude at the beach should also be aware of the areas generally used by nudists/naturists, so as not to offend any ordinary beach-goers.

And, of course, anyone visiting any beach in New Zealand should be sure to put on plenty of sunscreen. The ozone layer above New Zealand is quite thin, meaning the country has one of the shortest burn times in the entire world – and if you’re baring it all on the beach, no doubt you won’t want certain bits to get burnt.

If you want to show all your skin in New Zealand, here are a few beaches to consider visiting:

The majority of New Zealand’s established nude beaches lie up north, where the temperatures are generally the warmest in the summer months.

Uretiti Beach, Northland – Located just 38 km south of Whangarei, Uretiti Beach is a very popular beach in Northland, both among regular beach-goers and the clothing-optional crowd. The Department of Conservation (DOC) runs a campground just behind the beach, making this a popular holiday spot.

St. Leonard’s Beach, Auckland – This beach used to be one of New Zealand’s most popular for nudists, until a few individuals began displaying some indecent behavior, which caused the local council to crack down on nude bathers. These days, however, tensions have dissipated, and naturists and families can again be found here.

Pohutukawa Bay, Auckland – This is one of Auckland’s most-frequented nudist beaches, and can be reached by walking 20 minutes north of Long Bay. The beach is named for the pohutukawa tree, which blooms beautifully and provides plenty of shade in the summer. This is an example of a nude beach that’s popular with families.

Ladies Bay, Auckland – This is a long-standing and popular nudist beach not far from Auckland. And, despite it’s name, it’s not just for women!

Orpheus Bay, Auckland – Another popular nudist spot near Auckland, this one is located on the northern side of Manukau Harbor.

Little Palm Beach, Waiheke Island (near Auckland) – All the beaches on Waiheke are very popular places for both locals and visitors, and most beaches have a clothing-optional attitude. There are several places known for skinny-dipping on the island, with Little Palm Beach being one of them.

Opoutere Beach, Coromandel – This beach is popular with nudists, and also features a DOC campground nearby. The nudist part of this beach is at the northern end.

Papamoa Beach, Bay of Plenty – Located in the sunny Bay of Plenty, Papamoa is one of New Zealand’s long-standing and popular nudist beaches.

5 Mile Bay, Taupo – This beach isn’t located on the ocean at all. Instead, it’s located on the shore of giant Lake Taupo in the middle of the North Island. Just 5 km from the town center, you can find this beach. A 100 m walk from the entrance will take you to where people usually bathe nude.

Peka Peka Beach, Kapiti Coast – In the Wellington region, Peka Peka Beach is usually recognized as being the first in the area to be known for skinny-dipping.

The South Island, with its cooler climate and often-rocky beaches doesn’t have as many nudist beaches to offer. However, naturists can be found in most larger cities, as can nude beaches.

Milnthorpe Beach, Golden Bay – Many beaches in sunny Golden Bay are suitable for skinny-dipping, but Milnthorpe Bay is one of the most popular.

Spencerville, North Beach and Waikuku Beach, Christchurch – Both of these beaches are popular skinny-dipping spots near Christchurch, with Spencerville being slightly easier to access than Waikuku.