New Zealand may not exactly be known as a mecca for foodies, but that doesn’t mean that this little South Pacific country doesn’t have some tricks up its sleeve when it comes to tasty dishes. New Zealand cuisine is mostly a mix of native Maori and European influences, and in the larger cities (like Wellington and Auckland), you can also expect to find a heavy Asian influence. However, despite a rather schizophrenic group of influences, there are some patently “New Zealand” foods that you should make sure to taste while in the country. 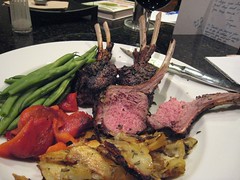 All the jokes you’ve heard about sheep in New Zealand are true – there are roughly 10 times more sheep than humans in this country. But, food-wise, this just means that you can find lamb and mutton on just about every menu. And I mean every menu – you can even order lamb at New Zealand Subway restaurants. Most of it is fresh and New Zealand-raised, so definitely give it a try at least once. 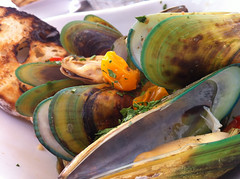 These large, fatty mussels are a delicious New Zealand specialty, and cannot be found anywhere else in the world. Named for the light-green lip that rims their dark green shells, green-lipped mussels are just one example of the fresh seafood to be found all around New Zealand. Because most cities are within an hour or two of the coast, seafood can be eaten everywhere here. Also try the fish and chips! 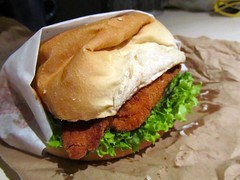 This wildly popular establishment in Queenstown has some of the biggest, most delicious sandwiches and burgers you can hope to find in New Zealand. The playful menu includes sandwiches with names like “Mr. Big Stuff,” “Little Lamby” and “Bun Laden” (the last of which is a falafel sandwich dressed with lemon yogurt and chipotle chili sauce). If you’re not very adventurous, just go for the original Fergburger, made (like all of its burgers) with New Zealand beef, and piled high with lettuce, tomato, onion, aioli, and tomato relish. The sandwich will be roughly the size of your head, so perhaps find someone to split it with so you can also get a heaping order of chips (fries).

If you’re an ice cream lover, you can’t miss out on Hokey Pokey ice cream in New Zealand. Hokey Pokey is essentially just vanilla ice cream with bits of sponge toffee mixed in, but it has become somewhat of a New Zealand icon. Many other NZ treats – candy bars, cookies – that use the same sponge toffee will often market themselves as being Hokey Pokey-flavored. Pop into any Tip Top ice cream shop around the country for a scoop. 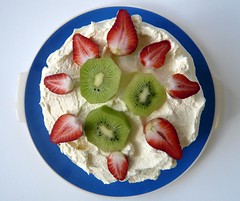 Even though Australia also claims ownership of this meringue-based dessert, New Zealanders consider pavlova to be their own invention. It is said the dessert was invented for and named after Russian ballerina Anna Pavlova when she toured through Australia and New Zealand in the 1920s. Regardless of its origins, however, pavlova is certainly a staple in New Zealand when it comes to dessert foods. The cake is basically a giant meringue, crispy on the outside and soft on the inside. It’s usually topped with whipped cream and fresh fruit, such as kiwi, which is another NZ specialty.

Pair some of these delicious dishes with: 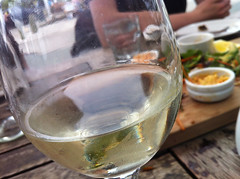 While not exactly a food, it’s worth mentioning New Zealand wines in this list. New Zealand wineries have really taken off within the past 30 or 40 years, and you can find wineries scattered all over both the North and South islands. Wine-tasting tours are popular in most major New Zealand cities and wine-growing areas, with Wanaka’s Rippon Winery purported to be the most-photographed vineyard in the entire world. Be sure to try a Sauvignon Blanc wherever you go, as it’s the wine New Zealand is best known for.