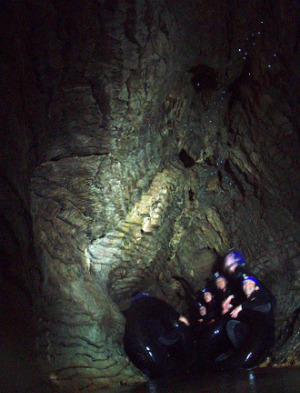 3D may be all the rage with TV shows and movies these days, but if you’re looking for a special effect that’s entirely natural and as old as the hills, you don’t have to look any further than the array of bioluminescent organisms that populate the planet. You might be familiar with fireflies or lightening bugs if you’ve ever spent time in the eastern US, and maybe you’ve seen those glowing jellyfish that many aquariums have in properly-lit tanks. But how many glowing life forms have you seen in the wild?

One perk of a trip to New Zealand if you’re into glow-in-the-dark living creatures is a visit to caves where glow worms live. There are two primary stops on the tour of where to view bioluminescent organisms in New Zealand – the caves at Waitomo and at Te Anau. The good news is that glow worms are visible year-round, and at any time of day (they’re in dark caves, after all), so you don’t have to worry about timing your visit to a particular season or hour.

There are also glow worm caves outside Brisbane, Australia, if you’re making a tour of both countries, and Australia has the added benefit of also being a place to see glow-in-the-dark mushrooms, too. In the same park where you can see glow worms in their caves – Springbrook National Park – you can also get a look at glowing mushrooms. While these glowing fungi grow in the wild, they’re not as reliable as the glow worms – so Springbrook National Park keeps a cultivated crop of them growing so you’re sure to get a look no matter when you visit.

Even if your kids (or your inner child) is focused entirely on high-tech special effects, there’s nothing like a peek at a worm or a mushroom that glows in the dark to inspire a sense of wonder that no video game can duplicate.

Wanna go see the glowing creatures up close and personal? Here’s where to find cheap flights to New Zealand. And since your trip isn’t likely to be spent entirely in a cave with glowing worms, here are some hotels in Auckland, too.