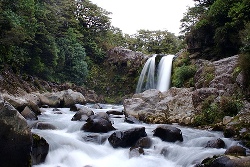 Tongariro National Park is the first national park in New Zealand and was established in 1887. The three peaks were a gift from the Maori tribe who saw it as the only way to preserve the heritage. Tongariro National Park has been acknowledged by UNESCO as one of the 25 mixed cultural and natural World Heritage Sites.

The park is located at 330 km / 205 mi south from Auckland by road, and 320 km / 200 mi north from Wellington. The nearest towns are Turangi, National Park and Ohakune.

There are 56 species of birds in the park, some of which rare endemic species such as kiwi, kaka, the blue duck, North Island fernbird and karearea. A lot of moths and wetas are also present here. The park is also home to the animals introduced by Europeans (rabbits, possums and red deer).

Near Lake Taupo, there is a podocarp-broadleaf rain forest where species such as Hall’s totara, kahikatea, kamahi, ferns, orchids and fungi can be found. Further up in the mountains, there is a beech forest and scrubland areas.

The main activities include hiking and climbing during summer. During winter –end of July to early November -, skiing and snowboarding are the main activities in the park. Hunting, fishing, horse riding, rafting and mountain baking are also popular and possible. The most popular hiking trail is Tongariro Alpine Crossing. There are also many short walks where you can see spectacular waterfalls and incredible volcanic features.

In the towns surrounding the park there are a lot of places to stay, ranging from budget hotels to luxury resorts. Within the park there are several camping areas and huts. If you like to stay in a hut, the fares are NZ$20/person during the peak season and NZ$10 during off-season.